Black & White & Red All Over 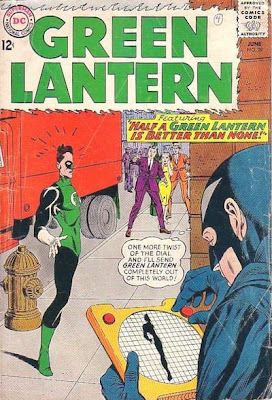 I've more or less avoided the Big Overarching Story in DC Comics over the last few months - since dropping the appaling Countdown with the tenth issue, I've made an effort not to read anything that tied itself in too strongly to that storyline. However, I've been looking forward intensely to Final Crisis, and I'll read anything by Grant Morrison, so I picked up DC Universe Zero with a reasonable amount of hope.

Written by Grant Morrison and Geoff Johns (who's shown signs recently in Action Comics and Booster Gold of actually being the decent, solid writer his admirers claim rather than the incompetent I thought of him as previously) and drawn by eight different artists, this is meant to be a fifty-cent preview of what's to come in DC's superhero titles for the next year or so, something you can hand to anyone and get them up to speed and interested in the titles.

On that score, it's a total failure. Because of the sheer number of different storylines it's teasing (along with a framing sequence), none of the previews could be comprehensible to anyone who isn't already reading those titles. It's a shame, because there's a clear attempt to give some unity to a fundamentally disjointed comic, but there's no way to tie all this information into a single narrative.

There's a framing 'story' here (Barry Allen is back... or is he? Or... is he? ) and some clear attempts to tie everything together thematically (the colours red and black appear a lot, and Morrison's recurring obsession with hands turns up again) - Douglas Wolk has provided a good set of annotations to this at http://savagecritic.com/2008/04/all-systems-intact-red-and-black.html - but it all seems forced.

The narration is on the level of "There is good, and there is bad. Bad and good. Dark and light. Shadows and some more light. Black and... red? (go with it) The dark and the light are in balance. Balance is important. It's in his hands now. He'll have to take it in hand. His left hand and his right hand. Two hands. For balance. Balance. Good Superman and bad Superman. Good me and bad me. Shadows. Black. Red. Like the suits in cards DO YOU SEE?"

Possibly not *quite* that subtle, but on that kind of level.

It's not really fair to judge this as a unified whole though - it's structured as a four-page intro plus a sequence of three-page previews (of stories in many cases not written or drawn by the people creating the comic) so it's probably best taken in that way.

This manages to sum up quite effectively both previous Crises in a mere four pages, and assuming we need to know anything about that for Final Crisis it does a good job of bringing people up to speed. However, already I'm getting a sense that this has been put together with a lack of attention to detail. The image at the bottom of page three, of parallel earths exploding, probably looked fine as pencils. But someone's dropped a photo of the Earth in, repeatedly, with Photoshop, so now we have five earths breaking apart with giant cracks over their surface that manage also to be visible on the water, with no distortion whatsoever of the shape of the continents, and with giant plumes of flame shooting out as far as the moon while causing *no disturbance at all* to the atmospheric patterns from the previous panel.

Final Crisis: Legion Of Three Worlds
This preview has three pages, and two of them are taken up with a double-page spread of a fight scene. In the one page of narrative we get to see some Patent Geoff Johns Dismemberment and discover that Superman is in the 31st century, fighting what look like shadow demons with the Legion, and that's about it. It looks pretty, but gives no real reason to read the comic.

Batman: RIP
This is much more like it. The symbolism is actually at its most overt here, and the dialogue is frankly ludicrous (Batman actually getting lines like "Red and black. Life and death. The joke and the punch line.") but it works for Batman in a way it doesn't for other characters.

There is more in this three-page sequence than anything else in the comic. It's almost a textbook in how to construct a talking-head sequence in a superhero comic. It contains allusions to other comics, but in such a way that anyone who hasn't read them won't be missing anything, it stays with the established characterisation, and it makes great use of the page.

Sticking with the duality theme, Morrison has Batman on a checkerboard floor seen through red-tinted glass by the Joker, who's in the dark with only spot lighting. The panels are done as powers of two (first two panels with a four panel inset, then eight panels on the next page, then sixteen on the page after).

Hands are used here as a means of expression - the Joker's body language reminding me in some ways of William Hartnell, who always used to keep his hands close to his face because the TV camera could then pick up both. The Joker barely speaks, gesturing to make most of his points, a creature of the body rather than the mind. Batman on the other hand only has his hands shown in two panels - the first panel in the sequence and one close-up panel of clenched fists when he gets angry and his emotionless facade breaks down. Instead we see only his mostly-covered face, or his body in silhouette. We know Batman only by his words, but the Joker only by his actions.Close-ups on Batman's eyes (another recurring feature of this comic) show nothing, of course, while the Joker's eyes are cracked, red and bloodshot.

The increasing number of panels, and decreasing number of words as the Joker appears more and more in control of the situation, ratchet up the tension, while allowing Morrison to homage several different comics (the situation is clearly referencing The Killing Joke, the last panel is meant to make us think of Watchmen, while the 16-panel last page is laid out in the same manner as The Dark Knight Returns).

This makes me want to read more of this story, and is by far the best thing in the comic.

Wonder Woman: Whom The Gods Fail
"She is peace and she is war" apparently. This seems like it could actually be teasing quite a good story (or a terrible one - tying real-world genocides into a superhero story could be a very tasteless decision) but the single-panel bits will only make sense to people who've been reading a lot of other comics. It might make people who read 52 want to read Wonder Woman but it won't bring in any *new* readers. And the last panel just says to me that someone wants some of that 300 money for themselves.

Green Lantern: Blackest Night Prelude
I have no idea what is going on here at all, having not been reading Green Lantern, except that I would be very surprised if the Black Hand (mentioned here, an old Green Lantern villain) and the Black Glove (the behind-the-scenes villain of parts of Morrison's Batman run, mentioned earlier) were either unconnected or the same character. The two-page spread of 'refracted light' is more-or-less incomprehensible, except that someone (or someones) are going to be followed. Given that Final Crisis is meant to tie into Seven Soldiers the colours-of-the-rainbow thing here might be interesting later on. This seems actually to tie in to some of the other stuff, but I'm left confused.

Final Crisis
This, along with the Batman section, is one of the more comprehensible sections, and actually gives me a sense of anticipation. It appears to follow on from events and concepts from 52, with Darkseid being equated with Lady Styx in some way and with Libra trying to get the Secret Society of Super Villains to join the Crime religion. The foreshadowing suggesting that Libra is Barry Allen is so obvious that it must be a bluff.

As for that last page 'reveal', Mark Waid, the only one of the four 52 writers not involved in some way with this latest crossover, said just before this came out, about The Flash

"Tom will make that book shine. And he’ll do it on the strength of Wally, not on some creatively bankrupt, desperate stunt like bringing Barry Allen back to life or something."

While there appears to be no love lost between Waid and DC editorial right now, he still appears to be friendly with Morrison (and presumably Johns), and I don't see him using terms like that about an idea that would have come from those writers. So either the 'return' is no return at all (most likely as far as I can see) or it's been forced by editorial edict against the writers' will, or I'm completely misreading the situation. We'll see.

I intend to buy Final Crisis and possibly several of the other comics trailed here, so you can expect more regular posts from here on in. I think, though, that this comic would have been infinitely more successful had they cut out the Revelations and Wonder Woman sections, and maybe the framing material, and concentrated on the Legion, Batman, Green Lantern and Final Crisis sections. They all seem to fit together, and a little more work could have fit those four sections into a 22-page narrative with some actual point to it, rather than this collection of sketchy trailers.
Posted by Andrew Hickey at 18:50

The multiple earths bit is especially hilarious because the coastline of Africa has been photoshopped in BACK TO FRONT.

I think the Waid comment is actually a self depreciating joke. After all, the storyline that put him (and in many ways, Wally West as the Flash)on the comics map for most fans was "The Return of Barry Allen" he did early in his Flash run.