This Is Going To Change Everything 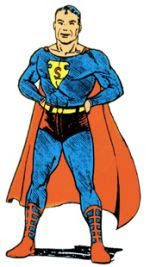 DC comics have not really served Superman very well. In fact, they've been positively negligent. Given that he's 'iconic', the most recognised comic character on earth, that everyone knows the character and his supporting cast, how many good comics have there been about him in the last twenty years or so?

People go on about the 'triangle number' era, and when I was eleven or twelve I must admit Dan Jurgens' overwrought melodrama had a powerful effect, but those comics don't stand up at all to rereading. Other than that, how many good - not even great, just good - comics have there been about Superman in that time?

Oh, he's been a character in a few good comics - Morrison's JLA, for example - but as far as his own titles go the pickings have been very slim indeed. I would be very surprised if out of the hundreds upon hundreds of comics worth of 'product' that have been turned out during that time more than at most twenty or thirty are actually any good. That's a horrible hit rate.

Recently DC have been doing better about this. Kurt Busiek must have written or co-written close to fifty Superman comics in the last two years, thanks to delays, fill-ins and covering for other writers, and he's a decent choice. He knows what makes Superman tick, and at least his first (co-written with Geoff Johns) story was actually very good. The rest have been variable, but they've been decent. Now he's moving on to Trinity, he's being replaced by James Robinson. I'm sure Robinson will be very good too. Superman comics are currently the best they've been in decades.

But it's hard to write a Superman story. After all, he's seventy. He's getting old.

Back when he was a youthful forty (and when his good friend Mickey was fifty, and I was busy being conceived), US copyright law changed. It still took thirty years before Jerry Siegel's rights reverted to him. That's a long time. Twelve years more than Siegel lived, in fact. Still, he got well-paid when he was alive - $35,000 a year is hardly peanuts, is it? Why, that's even more than I make, if I don't work overtime.

As is the nature of these things, the debate around this on the internet has pierced right to the crucial points, with people falling roughly into two camps. On one side there are those who think that using the courts to enforce your legal rights against a multi-billion-dollar corporation is un-American, while on the other side there are those who think it's fine so long as they get their comics.

Me, I'm wondering if Ub Iwerks has any family.

Because, really, does it matter if we don't get any more Superman comics? After all, what more stories can there be to tell about him? After seventy years, what's left to say? Superman's grown old. He's a relic of a previous time. Better to just put him out of his misery.

Because fighting over the ownership of an idea as powerful as Superman is both important (for the money for Siegel's family, and the money Time Warner stand to lose) and utterly unimportant. DC Comics no more control Superman than they control Hamlet. Superman is surviving not on the quality of the comics, but on his 'mindshare'. Even though nobody's reading the comics, everyone knows who Superman, Clark Kent, Lois Lane, Lex Luthor are, what Krypton and Kryptonite are. Despite what many comics fans think, he's independent of context and certainly of 'continuity'. He's a myth, in the category of Robin Hood or King Arthur rather than of Green Lantern or Firestorm. He's Christopher Reeve, a Curt Swan drawing, a Max Fleischer cartoon, John Williams' theme, "Look, up in the sky!"

Apparently in the 1990s Ted Turner wanted to move ownership of Superman and Batman away from DC Comics and to Cartoon Network, on the grounds that they'd look after the characters better.

The logo of All-Star Superman has changed over its ten issues. The Superman has got bigger, the 'All Star' smaller. The implications are clear - this is the real Superman, not that impostor in those other comics.

Meanwhile, in Metropolis, "the true man of Steel! The authentic man of tomorrow!" is chasing Luthor. He has to drive a giant robot, of course, because he's only an old man with Alzheimer's.

Is it only me who thinks that Kandor on Mars looks like Dr Manhattan's structure from Watchmen 9? Possibly a stretch, but both men do decide to create life. (Edit - Marc Singer thinks so too) .

We've already seen Earth-Q, of course, in Morrison's JLA Classified prequel to Seven Soldiers. And we knew Superman had entered our world to try to prevent the evil seed that had entered there from spreading. And Superman has been presented throughout the series as a solar deity, more Mithraic than Apollonian in nature, descending from the sun into the darkest depths of the underworld before slowly rising back up. At this point in the series, he has returned to the level of normal humans (though as with the 'as above, so below' nature of the whole story, events affect and are affected by events on many other scales), and this is the issue in which he creates the world (in only one day - he doesn't have time to spend six days on it, and certainly can't afford a day of rest) and in which he dies for us.

And the last we see of him, he's stretching out his hand to us. But unlike Zatanna, he isn't reaching out for our help, but even when he knows he's dying he's reaching out to help - to cure sick children, because that's what Superman does.

Yet ten minutes after his death is reported, but a page before, a young man sketches an image. It's an image of a muscular man with a friendly smile, in a tight-fitting costume, with a shield on his chest and a cape on his back. He looks strong, but utterly relaxed, confident but with no arrogance at all. He's a man who can take on the world, and he's being born again.

The legend under this birth reads 'Neverending', but this series only has two more issues to go. You see, it's not the 'real' Superman - even as Morrison obviously thinks of this story as belonging in the same world as his JLA and Seven Soldiers stories - it's 'out-of-continuity'. An imaginary story.

Of course, Grant Morrison did once ask to write the 'real' Superman comics. He submitted a detailed proposal with Mark Waid, Mark Millar and Tom Peyer, but they were turned down flat. DC decided instead to do stories like President Luthor and later Infinite Crisis, in which Siegel & Shuster's original Superman is beaten to death by Superboy. But they told Morrison, Waid, Millar and Peyer that they would never be allowed to write the 'real' Superman comics. They'd have shaken things up, been too daring.

And after all, they had to protect the copyright.
Posted by Andrew Hickey at 23:25

Thanks for explaining this in more...esoteric terms. Mostly, for anyone who's actually decided to talk about this subject has been purely legal and very dry. Reading something that touches on the more intangible points was refreshing. I thought it was a good, thoughtful post.

(and the scene with the attempted suicide in ASS 10 made me cry. It is easily the most powerfully beautiful moment I've seen in a superhero comic.)

I disagree that there's nothing left to be said about Superman, and in fact this whole post kind of confirms it--allowing Morrison to do his own personal riff on Superman has clearly revitalized the character. Freeing Superman from the control of DC comics (who would, of course, be perfectly free to continue publishing their "in continuity" comics) would probably be a huge benefit to the character, because it would allow everyone who wanted to to jump in and do their own thing. The "mindshare" would only increase, and without being ridiculously beholden to continuity and the whims of the parent corporation, we might actually see something daring being done with the character.

People still write stories about public domain characters like Dracula, Tarzan and Sherlock Holmes. The "originals" remain in their classic forms, but they've also been mutated into screen and comics versions. All this helps keep them alive in the public imagination AND makes them available to storytellers who might find something interesting to say about them. I remember someone referring to League of Extrordinary Gentlemen with a quote by some classical author suggesting that it's ALWAYS better to use an existing, well-known character who already exists as an entity in the public imagination rather than creating something new, because it will create an immediate connection with the reader. That's why the ancient Greek playwrights kept riffing on their own mythology, developing and refining it. The process has continued into the modern day, and it's only right that Superman should be part of it.

Prankster, that's actually the point I was trying to make (though reading this back the post isn't especially very well written, and my point gets lost somewhat in my attempts at cleverness). DC's ownership of the Superman copyrights means I'll never read a new Alan Moore Superman story, for example.

(What a wonderful thought, actually. I know it'll never happen but I'd *love* to see what would happen if the Siegel family got together with Moore to produce an entirely new Superman series (though obviously without using the S-word in the title) starting where Action 1 left off and completely reinventing everything else...)