Holly Reads Glamourpuss So You Don't Have To 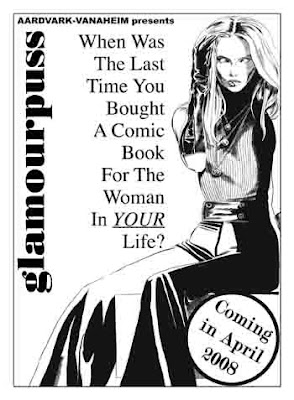 Given that Glamourpuss is supposed to be aimed at non-comics readers, and that it appears to be aimed at women at least in the promotional material on the website, I thought it would be interesting to see what my long-suffering wife had to say...


Hello, it's Andrew's imaginary wife here again. (I'm sure the rest of you have long forgotten that someone accused Andrew of making me up, the last time I did Holly Reads the Comics, but I am still amused by it.)

Andrew has insisted that I not read his entry about Glamourpuss until I've written my own (apparently so his geeky reactions don't sully my clumsy-layperson ones, but how likely is that anyway? much of what he says in this blog is gibberish to me, and that's just how I want to keep it!). So all I know about this comic is that he's told me it's like "twenty pages of Understanding Comics sandwiched between five pages of Mad magazine" and he's also compared it to Fate of the Artist and Alice in Sunderland. All of which makes me very dubious, as he knows what a sucker I am for things like that, and I think he's trying to trick me into playing along.

But there's always the chance that he might be right... So here we go.

I probably shouldn't be surprised, with all these allusions to other never-mind-that-fourth-wall comics, but I still wasn't expecting something that started off so chattily.

For context: I have read some of Cerebus (um, Church and State through Melmoth I think, though Andrew will correct me if I'm mistaken there... and I read all that in completely backwards order anyway and about four years ago, before I'd read any other comics, so it probably left a weird impression on me and certainly a vague one) but I didn't really know anything about its author at the time. So all I know about Dave Sim is sort of like those scenes in plays where they just have a messenger come in and tell you of a huge battle that's conveniently happened offstage so they don't have to choreograph it. (The battle is of course the one over whether he is worth anything as an artist or whether his personal ideas mar all of his achievements, and the messenger of course is Andrew, who's definitely on a particular side of this battle.) But the subject of the debate matters less than that the nebulous, wildly unfair, and possibly completely wrong impression I have gotten of Sim as a sinister baddie with big, pointy, nasty ideas that hide under your bed and watch you while you sleep. To find that the bogeymen have artistic heroes and preoccupations (even obvious ones like "cute teenage girls") is remarkable but a relief; it's something I can relate to, something refreshingly normal.

At least for the kinds of comics I read. I'm not a normal comic reader; I just want for Andrew to insist for months or years that I should read something and then occasionally give in (and then often complain that he let me go so long without reading it, as was the case with things like Promethea). I'm especially susceptible to the kind of discursive-essay sort of things, that give you some idea of the actual person writing and/or drawing this that Andrew compared this to. I'm pleased to say that it is indeed enough of that kind of thing to keep me happy all the way through reading it. It takes me an enormously long time to read a comic, and I have very little patience with them, so this was quite a big thing for me.

Of course there were lots of words too, but I never find that as disheartening as I suppose it is expected to be. Especially with a subject like this; if you get too close to filling every place with pictures of fashion models, you pretty much are drawing a fashion magazine. I shudder to think.

That's another thing. I'm sure that Andrew is asking my opinion not just because I am a convenient target, living in his house and all, but because I am a lady. But I'm the kind whose wardrobe mostly consists of things other people get her for Christmas presents, the kind who truly feels sorry for him for all the fashion magazines he would've had to actually read in order to find all those pictures (until I remember that he, of course, chose to do so! maybe he actually is crazy) and that familiarity with the top designers. I've only heard of any of these brand names thanks to my cheerfully shallow sister-in-law.

If Sim's being misogynistic (the subject that both the subject and his reputation make unavoidable) I wouldn't say I'd be the last to know but I don't think I'm terribly sensitive to that sort of thing either. Though I feel I should say something harumphing that starts, As a woman... in the way that so many complaining letters to editors and suchlike seem to start As a parent, I'm deeply offended by the idea that my children might be forced to learn about evolution, or whatever. But I have no particular reaction to this "as a woman." I'm not terribly good at that sort of thing (which is perhaps just as well; as a reader I tend to yawn at and ignore such sentences). I'm afraid I am a poor litmus test for the feminine experience.

But from what Andrew tells me, there are people — even people who aren't rabid feminists — who are not going to touch Glamourpuss with a ten-foot pole because Dave Sim is such a misogynistic misogynist ... and I think that's kind of a shame. Because it seems kind of fun, so far, blessedly unusual and kind of promising, and it'd be a shame to shun it for something that I don't think is really present in it. Especially if that judgment is made sight-unseen. Oh well; their loss. Except, well, the comic industry is so warped that if enough other people don't want to read it then I won't get to read it either... but it's too late (at night) and too early (in the grand scheme of things; there won't be another issue of Glamourpuss for me to read until, what, July or something) for me to worry about that too much.
Posted by Andrew Hickey at 22:30

Labels: Dave Sim, glamourpuss, holly reads comics so you don't have to

I appreciate the effort and maybe it's just me but I can't tell where the actual review of the comic itself started and I'm getting no description at all of what's actually in it--a scan or a quote would be nice. Thanks!

Seconding Mercutia - I'm not clear from this review what the comic is even about. Is there a story in it? Or is it just pin-up art? (For what it's worth, I also had trouble finding this info out from the comic's website as well.)

It's a similar situation to the novelist Graham Green – a rabid misogynist... but he wrote 'The End of The Affair' possibly the most touching and subtle novel about love...

If you want to know what the comic's about, either read the post directly below this one, or go to a comic shop and ask to read the free copy that every comic shop got sent...

Er... it was Graham GreenE, and by no stretch of the imagination was he a rabid misogynist. Rampantly unfaithful, yes, but that's a different story. Comparing Dave Sim with him is daft. You're right about 'The End of the Affair', though.

I don't mind that Holly didn't tell us what the book is about, but I'm a bit disappointed that she devoted only about 15 words to actually telling us what she thought of it.

Heh. My apologies, Jason; I think you're absolutely right. I wrote this after several days of promising I would write it and with a shameful lack of proofreading (the clumsy sentences and typos would never survive in my own blog) and lack of a coherent theme. My erstwhile English professors would've red-penned this all over, I am sure.

I'm happy to try to be more explicit in what I thought about it, but it's a bit difficult, to be honest, because (especially now, a few weeks after I read the comic) I didn't think much about it at all.

I found it pleasant enough, but if it weren't for all this hype about the writer I wouldn't have thought twice about it. I understand it's not like most comics (I dimly remember the brightly-colored badly-dialogued horrors Andrew's occasionally asked me to look at) but it is a lot like the sort of comic I usually read (mostly, the ones mentioned here, from Alice in Sunderland to Fate of the Artist.

I'm not trying to sound so blasé about this, because one of the things I like about the comics I read is that they're all distinct and clear in my mind and I appreciate their quirkiness (without being gimmicky or strange for its own sake) in a sea of superhero tales. But I read those in big volumes, usually able to get the whole story at one time (because they're things Andrew's bought and read years ago), and I can't form the same kind of clarity in opinion after only the first issue of this.

Sorry to disappoint. :) Though I'm not sorry to disappoint the commenters who expected a review; I never tried to write a real review of this, because there are so many people who are better-informed and more opinionated and I'm happy to leave it to them. I was only asked because I'm not one of those people, so I'm not surprised or disappointed that I didn't write the kind of thing they wrote.